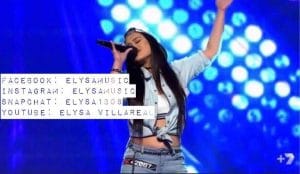 Elysa Villareal is an 18 year old up and coming Pinoy (Filipino) singing star and songwriter. Based in Sydney’s outer west, she has been singing since the age of 8, when she saw Jessica Mauboy on “Australian Idol” and became hooked. She has appeared on “The Voice”, making it to the live auditions last year out of approximately 20,000 hopefuls. This year she auditioned on “X Factor” as part of the group “Elev8” and made it to Boot Camp. Their audition has had more than a quarter of a million views on YouTube since it was posted a few weeks ago.